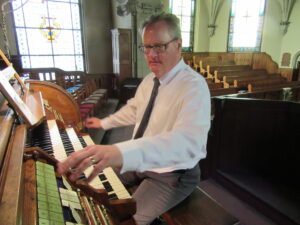 Award-winning organist Dean Billmeyer is in his fortieth year as University Organist and Professor of Music at the University of Minnesota. In this capacity, he teaches classes in Counterpoint, Thoroughbass, and Keyboard Improvisation, as well as Organ and Harpsichord. Dean has appeared as a recitalist and clinician throughout the United States and Western Europe – his numerous awards include prizes in the Dublin International Organ Festival Competitions in 1980 and 1988, and the American Guild of Organists has twice awarded him for the highest scores nationally on the Guild Certification Examinations.

Dean’s Double CD recording entitled “Straube Plays Bach” is the only commercially available recording of the nine major Preludes and Fugues and G Minor Fantasia and Fugue on early 20th century tubular-pneumatic action organs using the idiosyncratic, hyper-Romantic 1913 edition of Karl Straube, the famous organist and cantor of the Leipzig St. Thomas Church. The recording, released by Rondeau Production of Leipzig in 2018, was nominated for the “Preis der Deutschen Schallplattenkritik” as one of the best classical recordings in Germany in that year.

Dean has appeared regularly as organist, harpsichordist, and pianist over the last twenty-one seasons with both the Minnesota Orchestra and St. Paul Chamber Orchestra. His upcoming performances include a special Holiday Organ Recital at Northrop at the University on December 7.