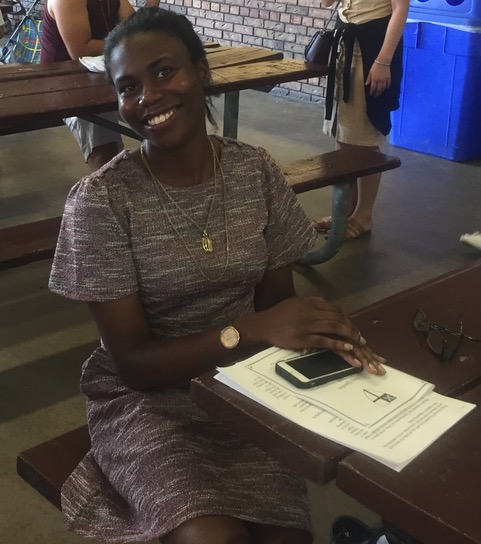 Good morning! It is great to be with you all today for this church picnic between these two faith communities and to celebrate the many baptisms happening today.

We also celebrate the Transfiguration of Christ, which gives a glimpse of Christ’s glorious manifestation as the ultimate bridge between heaven and earth and between God and his people. It can be hard to imagine what this mystical experience must have been like for the apostles. However, it’s funny that in the Gospel of Luke, Peter thought that conversation between Christ, Elijah and Moses was a sign that he should set up holy camp out on a mountain. He simply had no idea about what he was witnessing and Luke seemed to have no problem calling that out. Yet, despite his short-sightedness and mistakes, Peter did prophetic and transformational work through God.

That is the hallmark of the Good News which is so encouraging to me, especially given my life experience.

My parents came to this country as immigrants from Nigeria in the 80s. My mom got her citizenship quite easily through Reagan’s amnesty. My dad got his after multiple and close encounters with the immigration system back then.

I was born and raised in Saint Paul and have five brothers and sisters. My house was ALWAYS filled with energy and a melding of cultures. We would have Nigerian food for dinner one day and spaghetti the next day. We would sing Nigerian hymns of prayer during the week and attend Roman Catholic service on Sundays. We would blare out songs from Prince to George Michael, to Nsync, to Hall and Oates, and Beyonce. We always made sure to find some way to laugh and poke fun at ourselves and each other. Memories of rolling on the floor after a brilliant joke gives me sheer joy that I know is a pure gift of God.

Underneath the joy and unity, was a lot of pain as well. Money was constantly a source of fear and anxiety for my family. I remember cutting coupons, making shopping lists, getting an allowance but always knowing it would be used for an imminent financial crisis. I also remember calling customer service for my parents when the internet or phone wouldn’t work because they believed my lack of an accent would mean the customer service representative would give us better treatment.

This brought on a lot of shame for being black, poor and a daughter of immigrants growing up. I thought the path out of poverty, racism and xenophobia was to do everything I could to position myself as marketable, as someone who with the right vocabulary, temperament and intellect could escape the jaws of poverty, discrimination and rejection.

In December of 2014, I received a painful reminder of how short-sighted this pursuit was. I went to a community meeting hosted by the police department in Saint Paul to find out how we could

prevent what happened to Mike Brown from happening here. One community member mentioned an article about how the Saint Paul police department has killed eleven people using deadly force since 2008 which is the most of any department in MN. She reacted to this fact in a joking manner by saying, “Eleven is pretty good given what’s going on here.” Most of the community members present (who were predominately white) started laughing. Eight of the eleven people killed were people of color. As one of the two people of color in the room, I was stunned and hurt. I felt so incredibly disposable. It didn’t matter that I graduated from Macalester College and got a good job. My skin color could be just enough reason to get me killed. For some cruel reason, that was considered a laughing matter. That night was one of the most painful, most hopeless nights I’ve ever experienced.

Now, I’m not sharing this for pity or for more people to have a better understanding of the struggles people of color face. If that was the point of speaking to you today, I would have politely declined the invitation. Instead, I want my story to spark intentional discernment around how you will respond as person of faith to the injustice that is happening around us.

I’ve heard that St. John the Evangelist parishioners had had great sermons that have called out the brokenness in our politics and communal life together. You’ve heard that our democracy is under attack. That moral leadership is in decline. That the weak and the vulnerable are seen as disposable. Working for the common good doesn’t seem so common anymore. That we struggle to see each other’s humanity despite our differing opinions. We question where God is in all of this.

This is all true. Yet, we have to ask ourselves, I have to ask myself, how are we called to respond?

We have a choice. We can decide to get lost in merely observing or analyzing what is going on around us: to boil down our politics to being about this policy issue or that one… this demographic or that one. We can seek the path of least resistance and avoid discussing the challenges we have around race, class, immigration status, and geography. We can resort to numbing ourselves from what is going on and believe there’s nothing we can do to change things. We can decide to stay on the sidelines and let things be decided for us.

Or, we can follow Christ’s proclamation and believe that “The Spirit of the Lord is upon us, because he has anointed us to proclaim good news to the poor. He has sent us to proclaim liberty to the captives and recovering of sight to the blind, to set at liberty those who are oppressed, to proclaim the year of the Lord’s favor.”

Is it by getting other people to vote in the general election? Is it by talking to your loved ones about shared values? Is it in speaking out about your own story of justice and hardship?

If you have no idea what that looks like for you right now, that’s okay. That’s normal. The goal is to work towards discovering you will accept Christ’s proclamation as part of our call to transform Minnesota and recreate our communal life together in the public arena.

To continue this discernment process, I urge you to attend our statewide voter engagement launch on Saturday August 18th from 9:00am – 2:00pm at House of Hope Lutheran Church in New Hope Minnesota.

At this event, we are preparing hundreds of people of faith to play a role in shaping this year’s election and ensuring a message of racial, economic and social justice is at the heart of our public conversation. We aim to reach at least 100,000 people of faith across the state and regularly communicate with 30,000 unlikely voters from mid September until the Election. We want everyone to receive an invitation to participating in our democracy by voting and having their voices heard. We would love for you to be there!

If you are interested in attending or what to know about other ways to make the necessary changes we need on issues like immigration, policing and economic justice, please look for Jamie Bents, Neil Elliot or me. We would be happy to talk to you and share with you some information to help you figure out your next steps. We also have a table where people can learn about becoming a citizen and registering to vote. We want everyone to find a way to participate in our public life together!!